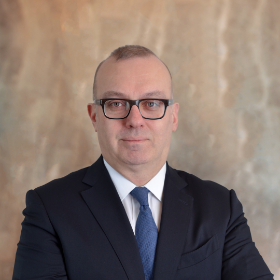 Ali Tuğrul Alpacar was born in 1968 in Istanbul. He graduated from Robert College in 1986 and from Boğaziçi University, Department of Mechanical Engineering in 1990. In 1992, he completed his master's degree in Business Administration at the University of Massachusetts. He started his career in 1992 at JPMorgan Chase in the Investment Banking department.

Since 1999, he worked as both co-president of JPMorgan Chase Turkey Investment Banking and Country Manager of Romania Branch. In 2002, he assumed the position of Director of Turkey Operations of UniCredit CAIBA Turkey Office.

Between 2015 and 2017, Alpacar served as an Independent Board Member of Erdemir and İsdemir in the Erdemir Group, as of 2018, he serves as the  Member of  Board of Aydem Energy.

Mr. Ali Alpacar speaks English and he is married and has two children.